I’m just your average farm gal. I’m active in the Second Amendment community, love my G-d, my horses, dog and cat aka “fur children” and my chickens aka “my little feathered darlings”.

But let me tell you about Sybil.

Sybil Ludington has been celebrated as the female Paul Revere because of her ride through Putnam and Dutchess Counties to warn the militia that British troops were burning Danbury, Connecticut.

Sybil was born in 1761, the oldest of 12 children. Her father was Colonel Henry Ludington, who commanded the 7th Regiment of the Dutchess County Militia, a volunteer regiment of local men.

On April 25, 1777, a 2000 man British force commanded by General Tryon landed at Fairfield, Connecticut, near the mouth of the Saugatuck River. The next day the force moved north into Danbury. In Danbury they began a search for stores of Continental Army supplies, also leaving chalk marks on the properties of British loyalists and informers. Properties without chalk marks were set to be destroyed. By 4 PM, several Continental Army storehouses and three private homes were in flames. For security reasons, the Continental Army had stored its supplies in Danbury, where they were thought to be safe. The stores included foods, spirits and clothing. The British, realized if they could seize the stores of the Continental army’s weapons, it would be game over. Tyrants always prefer a disarmed populace, doncha’ know ol’ chap?

A messenger was dispatched from Danbury to Col. Ludington with the news of the attack, and he reached the Ludington home at approximately 9 PM. Col. Ludington began to organize the militia, but the men were scattered throughout the area in their homes, and it was well into the night. The messenger was exhausted and not familiar with the area, and would not be able to find all of the militia volunteers. Sybil Ludington, who had just turned 16, was very familiar with the area, and left on her horse Star to sound the alert.

Sybil left for her now-famous ride at approximately 9 PM into the rainy night, traveling 40 miles from her home and returned home near dawn the next day. Sybil not only had to avoid British soldiers in the area, but also British loyalists, and “Skinners”, who were outlaws with no allegiance to either side in the War. Some accounts indicate that a church bell was rung in Carmel after she gave the alarm, and that a man offered to accompany her on the rest of her ride. These accounts claim that she declined his offer, but instead dispatched him eastward to sound the alarm in Brewster.

The men arrived too late to save Danbury, Connecticut. At the start of the Battle of Ridgefield, however, they were able to drive General William Tryon, then governor of the colony of New York, and his men to Long Island Sound.

After the War for Independence, Sybil and presumably her horse Star as well, were thanked by General George Washington.

So, at 16 years old, the girl rode twice as far, alone, at night, in a storm than Paul Revere to warn the people.

It’s a hard job, but we need more “Sybils and Stars”. 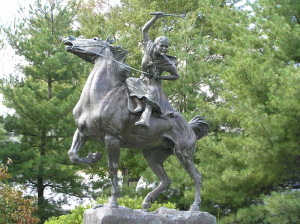 Sybil Ludington and Star on their famous ride.