Today is Pesach Shani, the second Passover. The first, and big Passover was celebrated a month ago. I didn’t get to celebrate as I would have liked, I was at work. But I was still very blessed. I was able to take some of the things I needed with me and made a little Pesach at work. So I had boiled egg, romaine, mince (closest I could come to charoset) kosher for Passover matzah and Kedem, which is Kosher grape juice. I read the story and did the best I could from that and the memory of the one Pesach I’ve celebrated a year ago. I didn’t get all of it right, but as a friend of mine Y.B. reminded me, G-d smiles when we try, because we are trying. But still, I was a bit sad. More than I would have thought.

But I’m in Israel, on Pesach Shani. Pesach Shani is the second Passover. It came about when the children who were not allowed to observe the first Passover in the desert went to Moshe (Moses) because they had been contaminated or were unpure, and wanted to know what to do. They didn’t want to be left out, they too wanted to give their offering to G-d. So Moshe went to G-d who told him to establish Pesach Shani, a one day holiday for those who had been unable to observe the first, for whatever reason.

There are some differences. Pesach is a week long, Pesach Shani is but one day.

Then there is the tone of Pesach Shani. Here are some statements from some articles on Chabad.org regarding Pesach Shani.

We celebrate Pesach Sheni by eating matzah once again, but this time, we do not have to rid our homes of chametz (leavened products, which represent our arrogant natures). We bring ourselves to G‑d as we are — defects and all. It doesn’t matter how old we are, how lost we’ve been, or where we are holding in our lives today. We beg Him to give us a second chance. He obliges. What an incredible gift.

The lesson of Pesach Sheni is that it’s never too late.

No one is ever too lost or too forgone to make amends in their lives. When we stray or mess up, if we recognize how far gone we are and we are shaken to our core, we can rebound. But what’s fascinating is that this rebounding is not the regular step-by-step conventional formula. In a single instant—or in this case, in a single day—rather than the seven-day process of Passover, we can redefine our past and mold our future.

In light of this, we can explain why the mitzvah of Pesach Sheni came about in response to the sincere request of individuals who were impure. One of the goals of Judaism is to draw holiness—downward, so to speak—into the world. A more important goal, however, is to elevate the world and the worldly aspects of man, to transform all aspects of our being, and bring to the surface the essential G‑dliness within us.The institution of Pesach Sheni was prompted by the heartfelt desires of those who, despite their impurity, protested, “Why should we be prevented from bringing the offering of G‑d? The mitzvah was given not as a commandment from above, but as an expression of man’s inner need to establish a bond with G‑d.

So as someone who has made more than a couple mistakes in her life, Pesach Shani gives me great hope. G-d loves me, just as I am. WOW! Of course he has hopes for me to grow and get better, but he still loves me where I am.

Which brings us to the great matzah hunt of 2016.  I’m in Israel, I didn’t get to do Pesach right, and it’s Pesach Shani. And I WANT matzah!

I went next door to the shuk. I asked the places that looked like they might have it. One guy was kind of rude, he told me it was after Pesach. I told him TODAY is Pesach Shani. He looked a little surprised. I also asked at the liquor store that had a lot of things that looked like they might have matzah. That guy said the same, but he was kind. I told him the same, aval hy yom ze Pesach Shani. He looked surprised too, but told me Tov Meod, not many people know that, so good for me.

I came back to the apartment & Deb & I visited for  little, she said my best bet would be the Sufersal (supermarket) a 30 min walk away. I’ve been once. At worst, I figured G-d would know I really tried. I was in the shuk over an hour looking.

So I pulled up google map and started walking. I found the store and looked all around. I couldn’t find any.  I asked a couple of people working there. They explained it’s after Pesach. I thought the lady was the man’s boss. I guess not. When I said hy yom ze Pesach Shani, he asked if that was why I wanted it? I said yes, oh yes (in Hebrew of course) and HE told her to go look for some, and if they had it to get if for me. She went back and looked in the store room. She wasn’t happy about it. I just bowed my head & talked to G-d about it. She came out and told me there wasn’t any, then she glanced up on a top shelf……there was one box! She got it down and gave it to me!It was only 10 sheckels for a BIG box! I flew home! I think I have the last box of Matzah in Tel Aviv!  I had a long talk with G-d before I opened it and ate. I shared with Deb, so we both ate Matzah! 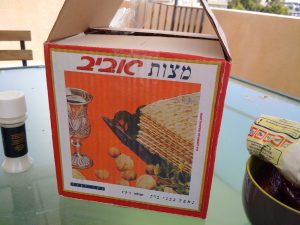 The last Matzah in Tel Aviv?

But it’s Pesach Shani and I’m eating Matzah in Israel!

I will leave you with this beautiful song by a group I love. Kippalive.