A Lot Can Happen In 30 Seconds

A tornado hit my best friend’s farm the other night. I got a call from her a few minutes after it happened. She sounded pretty calm, it crossed my mind it could be the calm of someone partly in shock. I wanted to go down then, but there was still a storm going and she told me that too many power lines were down. I said I’d come the next day. She told me I’d never get through. I said I’ll come Wednesday, she said I might be able to make it then. She said they were all safe except one kitty who was missing. The roof was gone off the barn, windows were broken through the house, but they were safe and at her Mom’s which didn’t sustain much damage.

So today was the day, I went prepared with two big foil pans full of Cafe Rio Black Beans, a bag of mountain trail mix, 2-2 liter bottles of Coca Cola, a 2 liter of cherry Coca Cola (the only thing she asked for was that I bring 4 Coca colas for them) a gallon of Arizona Sweet Tea, a 2 liter of Diet Mountain Lightening, it’s like diet mountain dew and 20 pounds of ice. 2 packages of baby butt wipes, in refreshing cucumber scent since in addition to no power, they had no water. A box of assorted flavors of black tea, and since she sounded so down Tuesday night I asked her what I could bring her to give her a lift. She couldn’t think of anything. Luckily I knew just the thing, I got her a bag of Hersey’s kisses with caramel. One of her favorite things is caramel. While chocolate may not solve life’s problems, it does make them easier to bear.

When I finally got there she and her Mom were having a sandwich, I unloaded and went in. She offered me a cookie, one relative had brought sandwiches last night, someone else brought a box of cookies. Their Golden retriever Charlie came up to me with his zebra toy in his mouth excitedly telling me about what had happened. I listened and commiserated with him.

As I munched my chocolate chip cookie Celeste told me how it all went down.

First, a little of the layout. Celeste and her family live in one side of a earth contact duplex, her Mom lives in the other. The two share a common laundry room/mud room. Each has a separate entrance to the respective houses from a shared patio area that used to be covered with a charming arbor trellis. In the summer it would be lovely shade made of vibrant trumpet vines.

Bill, Celeste’s husband, had been outside the front door of Edith, his mother in law’s side. He saw the flashes of lightning and the power flashes, then he saw the tornado.

Now some of this is hitting me strongly because of the recent Systema class I took, and because I just finished Joe Mayberry’s first book, The Systema Warrior Guidebook. I’ll give you a link to the series of articles I’ve been doing for The Zelman Partisans at the end of this column.

Bill didn’t stand there and think, well, it’s a tornado, it may turn, they do that. He didn’t stand there and watch it to see what it would do, he read the writing on the wall and reacted instinctively. He spun and whipped back into the house and started yelling for them to get down. Celeste was at her Mom’s but they didn’t know where there 20ish son Jake was. Bill was yelling at Jake to get down, Edith was already on her knees and Bill put her all the way down and shielded her body with his. Edith was worried about her only pet and constant companion Molly, a little dog. Celeste put Molly under her, and shielded Molly with her body. Jake was in his house, he lives with Bill and Celeste when he’s in town. When Bill yelled at him, Jake didn’t say “Aww DAD, seriously?” He didn’t argue with his Dad, he didn’t look out the window to see if he could see it, he didn’t go out the door to check it out. Had he done any of those things? He’d be dead. This young man I’ve known since he was maybe six? He’d be gone.

Jake grabbed his Golden retriever Henry and threw him in the laundry room, then dived in after him. As he was diving into the laundry room, which has no windows the wind sucked the door closed after him. Estimates are within less than 2 seconds time from when Jake hit the laundry room to the door slamming shut. One thousand one, one thousand two. You’re dead. The wind came from the massive beam that flew through the kitchen window where Jake had been standing.

I absently reached down and rubbed Charlie some more as he continued to tell me his odyssey. Charlie had been missing for a while, he was finally found hiding in the garage, sitting on the golf cart that they use to putt around the farm. Everyday Celeste and the Goldens get on the golf cart and go down to their beautiful woods that Bill keeps like a park and the boys have a nice run through the fields. So I guess to Charlie? The golf cart is a “safe space”. It’s a bit disconcerting to realize a neutered Golden Retriever has more balls than most liberal snowflakes.

We finished our cookies and took the boys for a walk and she showed me the devastation. We fed the horses at the barn, all three were ok. One has a small scratch on his nose, that’s it. The roof was ripped off the barn while the horses were in it, and they are ok. Matt cat had reappeared yesterday and Celeste said in spite of the horror of all of this, after Matt cat came back she felt so much better. She said he was all sticky and covered in something, they have no idea what but by the time I saw him, he was sleek and shiny. Orange and white Paladin cat accompanied us, to supervise I suppose. She had managed to tie up the field fence around the pony pen with hay twine, so she had been able to let the horses out of their stalls after almost three days. So their brains were improving. We fed them and changed water in their buckets since the white van in the drive when I got there was the nice water man and water had been restored. Seems when water pipe is ripped out of the side of your house it creates lakes in your patio area. Huh. So fresh water all around for the horses and Matt cat.

Bill and some buddies from work were nailing a barn door back on to one end of the barn, that cut down on the wind tunnel, it’s a temporary fix, as is the barn roof, but if it works for a few weeks it’ll do.

About then Celeste’s cousin Charlie (not the dog, a really nice guy) got there with a big dish of fresh homemade chocolate chip cookies. I just laughed and said “Well, we are people of the South, when disaster strikes we show up with food and work gloves”. FEMA? BAH! The government? BAH, we bring food, tools and work gloves.

Bill came up on the golf cart when Charlie got there, I don’t think the chocolate chip cookies had anything to do with it though. I walk over to Bill and said “This will never happen again” and gave him the longest hug. I am SO grateful for this smart, savvy, brave man who does whatever he has to do to protect and take care of his family.

Then Celeste, Edith and I got to work. Celeste pointed to a debris field and said “salvage”. While she worked on salvage with her Mom cataloging what was saved and what was lost for insurance purposes I started treading beams of what used to be a storage shed. I found old photos of pets I vaguely remember Celeste having when we first met and became friends, they were fine. They were right next to ruined books, covered by a pair of men’s underwear. I found numerous marbles from Jake’s collection. I took great joy in giving them to Celeste and telling her, “no matter what you may think, or people may say, you have not lost them all”.

The field was littered with broken glass and boards loaded with nails, so the dogs had been penned up in the house. The cats were still on hand to supervise us though.

A set of intact china belonging to their daughter was found, but much of Bill’s Mom’s china was broken, although we did find some pieces. I found vases, some of Celeste’s beautiful silk flowers she makes lovely arrangements from, pieces of their nativity set, handmade quilts and afghans.

It was very sobering. I was chewing over what Bill said, “Sybil, a lot can happen in 30 seconds”. I searched through this family’s memories for things I could save for them, baby books? Bill’s letters from college, a vase that had been aunt somebody’s. Memories saved and treasured strewn over huge swathes of land decorated by uprooted trees and the neighbors clothes.

It was interesting, for the last few months, I don’t really know how long, I’ve felt my intuition and instinct have been jammed up. I don’t really know why, I think I’m getting a glimmer though. But as I mused on Bill’s words, I began to think about what is really important in life, what really matters. And about how we live our lives. And I began to try to let my instinct and intuition guide my searches. I found some amazing things intact. Celeste was overjoyed and shocked. I had been searching in a part of the debris field that had already been searched. By three people. So perhaps in trying to good for someone else, I am having some healing of some sort. Because the radar was working.

When Celeste and I got our turn with the golf cart we took the Goldens and went to the field again. Heartbreaking, trees over a couple hundred years old, laying on their sides with root balls exposed far taller than I am, they left holes 8 feet deep in the ground. Their woods will never be the same again. Not because they didn’t take care of it, but because something beyond their control whipped through, a lot can change in 30 seconds.

No matter how rooted we think we are in this life, no matter how rooted we think our lives are, they aren’t. Nothing on this earth is rooted beyond destruction. Only, only the things we have rooted in G-d are beyond the reach of this life. And a lot can change in 30 seconds. Live each day, the best we can, try not to borrow trouble, try to appreciate the things that bring us joy. Horses kisses? Oh yeah, a kitty on the lap, your dog nuzzling you? A friend on the phone, a random text message saying someone thought of you, coffee with a friend, good music and fabulous sunsets and sunrises. Enjoy it all, drink it in. A lot can happen in 30 seconds, and some of them may well be miracles. 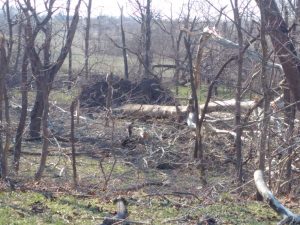 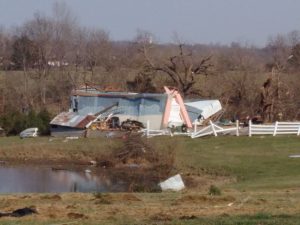