I Am A Student

The deeper a Christian’s faith, the deeper it’s roots will run in Judaism. ~~From my class notes.

Yep, in my advanced years I have decided to go back to college. I didn’t really intend to. I was just going to take a couple classes. I was going to take Introduction of Jewish Roots and Jewish Culture I (which I believe covers the Second Temple period). The program I’m in offers you the chance to just take the classes for audit, or you can go for a Bachelor’s or Master’s Degree. I got to looking at what was going to be offered as classes. Hmmm, Women of the Bible, Bedouins, Apocalyptic literature, The Bible and the West Bank, Israel Today, Biblical Feast days and The Holy Days of Israel. Then I checked what was required for the Bachelor’s. Well, there are the required courses and you need 33 electives. I looked at the list. Without much thought I found 29 that I wanted to take just for the knowledge, like the ones I just listed. That means that if I take just 4 more classes than the ones I already want I would have a Bachelor’s Degree in Middle East Studies. WOWZA! It fits. It suits, and I want to do it. I signed up to take the classes for credit.

One of the things that came up during my first night at class was that Jesus was a Jew, the Bible was written by Jews. The early church was Jewish.  In my lifetime I’ve been a Southern Baptist, a Presbyterian, I attended a Methodist Church for awhile, a member of a Evangelical Church and Orthodox Cowboy. The Bible was written in the Middle East, I’ve lived in the midwest all of my life. It was written over 2,000 years ago. I am NOT that old! I said advanced years, not relic. So the Bible, which I believe to be G-d’s inspired word to us was written by a culture I am unfamiliar with, by a people who’s beliefs I’ve not been that familiar with in a long ago age.

So what you ask?

Well, I was visiting with my boss about this the other day. I asked him if he would be mildly offended if I said to him “You seem very gay today!” He only startled a little (why yes, I have worked there a while, why do you ask?) when he replied “Knowing you, no, I really wouldn’t”. I told him I remembered it as a line from a text book 154 years ago when I was in first grade. Then I told him a line from a Campfire girl pledge I had to learn.

As faggots are brought from the forest Firmly held by the sinews which bind them, So cleave to these others, your sisters, Whenever, wherever you find them. Be strong as the faggots are sturdy; Be true to your…‎

I told him that just conjured up a mental image I didn’t even want to think about.

My point? You know there is one. Look at how much things have changed in just the last 145 years since I was in Campfire Girls. I feel to really understand the Bible more fully I need to understand more about Israel and Judaism, more about the Hebrew thought process.

I’ve also come to realize how inadequate my knowledge is of the Old Testament. I’m tired of getting into discussions about things in the Old Testament and getting my butt kicked (not literally).

Which brings up another really good point. Why do we call it the Old Testament? The point was made in class while some think that the New Testament supersedes the Old, especially those that think incorrectly that the Christian Church has replaced the Jewish people that G-d chose as his, it doesn’t. Suggestions made were “First Testament” “Original Testament” “Older Testament”, but for me, my choice, I think I shall stick with calling it the Tanakh. The Tanakh is the “Old Testament”, if you choose to call it that, and Tanakh (תַּנַ“ךְ) is a acronym for the first Hebrew letters of Torah (first 5 books, the books of Moses) Nevi’im (Prophets) and Ketuvim (Writings).

I’m grafted into to a fabulous Olive Tree root, wow, how awesome is that? But to know what Olives do and how Olives think, I believe that a bit more education could aid me on my journey. Someone described the Bible as a Hyphen between Heaven and Earth, between G-d and his people. I choose to walk on and in that hyphen, and hopefully in the process will move closer to what G-d hopes for me, what he has planned for me.

G-d has put me on an amazing path, one that nothing in my life has qualified me to be on. President of a Second Amendment Organization, Member of a Board of Directors for a State Organization, Director of Public Relations for JPFO, and now one of the people behind the formation of The Zelman Partisans, a Jewish Second Amendment rights group. I assure you, nothing has prepared me for any of it. But I suit up and I show up. And I bless G-d for the chances he has given me, and I will do my best to be an asset. And perhaps more important, to move closer to who he created me to be.

My patient boss asked me what I was going to do with my degree. Well, we’re talking 12-20 years from now, but I told him a saying my Dad used to have “That and a dollar will get me a cup of coffee”. But, what would be a dream? Watch for me on the news. I’ll be on a panel with Moshe Feiglin, Danny Danon and Yehuda Glick. We will be explaining the events that led to Jews and Christians now being allowed back on the Temple Mount to pray, whenever they want, however long they want and however they want, without fear of attack by people intolerant of those two religions. I’ll be the one with the sparkly barrette and the fabulous earrings from Yafo. 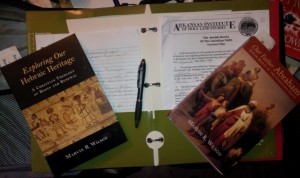 The Holocaust: Through Their Eyes

“Any man’s death diminishes me, because I am involved in mankind, and therefore never send to know for whom the bells tolls; it tolls for thee.”~~John Donne

I attended a showing of The Holocaust: Through their eyes at the Jewish Community Center. It is the accounts of local holocaust survivors. Not people who heard about it from their distant cousin or parents, but lived it, survived it. Posted over at The Zelman Partisans